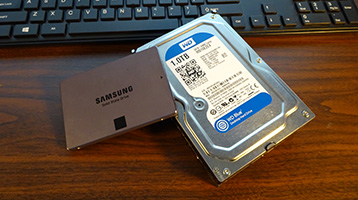 In the past, you only had one option for storing files and applications on a computer: a mechanical, spinning hard drive. But then SSDs came on the scene and started being used in ultrabooks and ultraportables. Now, you can configure SSDs in any computer — laptops and desktops included.

But what’s the difference between a traditional HDD hard drive and an SSD, and what are the pros and cons of each? Glad you asked! Here’s what you need to know.

What a Traditional Hard Drive (HDD) Is

Traditional hard drives are basically metal platters with a magnetic coating that stores your data. The platters spin, allowing a read/write head on an arm to access the data. This contraption is stored in a hard drive enclosure.

What an SSD Is

SSDs have the same functionality as HDDs (they boot up your system and store applications and data on your computer), but instead of a magnetic coating on platters, SSDs store data on flash memory chips. These chips are installed either on the system’s motherboard, on a PCI/PCIe card, or in a hard drive box. SSDs aren’t the same thing as a USB thumb drive, even though they also use flash memory. (SSDs are much faster and more reliable.)

Speed — Speed is one of the SSD’s primary pros. SSD-driven machines will boot up in a matter of seconds. HDDs take time to speed up, and even when operating will run slower than an equivalent SSD. This means an SSD-driven computer will boot up faster, launch applications faster, and will run faster.

Fragmentation — When HDDs start to fill up, large files often become scattered around the disk platter (a.k.a. fragmentation). SSDs, on the other hand, aren’t affected by where the data is stored on their chips. So you don’t have to deal with fragmentation on an SSD.

Durability — HDDs are mechanical and subject to mechanical failure. SSDs are therefore much less likely to get broken, and are more reliable in preventing your data from disappearing due to drive failure.

Physical Size — Because HDDs rely on mechanical, moving parts, they take up more physical space than SSDs. SSDs continue to get smaller, and are more convenient and portable.

Noise — HDDs are just plain noisy when the plates are spinning and the read arm is moving back and forth. SSDs are completely quiet, since there are no moving parts.

Overall, although HDDs are cheaper, SSDs win on performance. Also, SSDs don’t wear out as quickly as HDDs. If you buy an SSD, it will probably become obsolete before it wears out. HDDs, on the other hand, will usually wear out before you want them to. So although SSDs are pricier up front, they can be a better deal in the long run.

Ready to Get Started?

Receive a Free, No Obligation Quote

Requesting a quote is free, easy and at only takes a minute.

END_OF_DOCUMENT_TOKEN_TO_BE_REPLACED

Enter your name and email to get our latest updates.